The Volta Tower at Wellingborough Museum 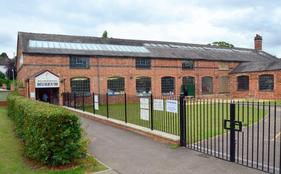 The charming Wellingborough Museum is certainly a place that with no question is worth visiting. This quirky attraction situated on Castle Way in Wellingborough opened to the public in 2007 following a £1 million lottery grant awarded to the Winifed Wharton Trust to convert the former baths into a museum. The museum plays host to a number of displays and exhibitions of Ancient Rome to current day featuring a large amount of local memorabilia. Run by a large group of volunteers with a wonderful friendly atmosphere, this museum is without question one of the best attractions in the Wellingborough area.
In May 2012, a new display opened at the Museum exhibiting a few of the prominent stones salvaged from the Volta Tower after its collapse in November 1951. These stones include the face of a cherub; the shield bearing the Mackworth Dolben initials and the name stones of the tower which were either side of the front door. An iconic symbol of the tower that once was, these artefacts very recognisable from photos of the tower are haunting to see in the flesh and the cherub in particular reveals the element of disaster in how part of its cheek is missing, presumably from the brunt of the collapse. The display has a large photo backdrop of the tower and also features a digital photo frame featuring an iconic postcard, and an A4 size write-up of the tower's history, written by myself for Wikipedia with edited sections since then.
Photographs and a video link to this magnificent display are below showing the artefacts in all their glory. 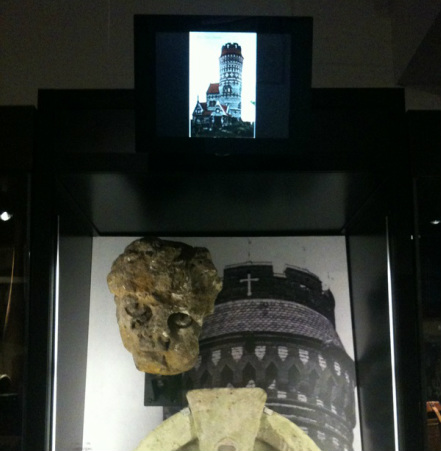 Below is the video taken on the same day as the above photos, showing the entire display in all it's magnificence.
These artefacts are currently on display at Wellingborough Museum which is open Monday to Saturday 10:00am - 4:30pm. The Museum is free entry and well worth a visit. The website can be found here: http://www.wellingboroughmuseum.co.uk/